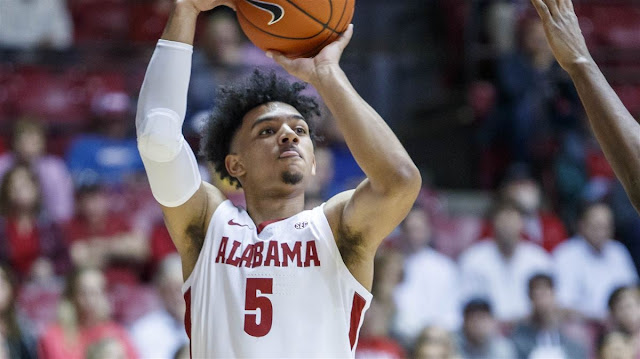 My Two Cents: Our guys seem to be getting more comfortable with the new style of play. The turnover issues haven't been erased, but the numbers are lower despite the tempo remaining top five in the country. The ball is being shared better, and the result has been improved shooting. But perhaps the most noticeable improvement has been on the defensive end. The guys are doing a better job defending the dribble, getting back in transition, contesting shots, getting in the passing lanes and rebounding. The team is playing with an intensity and a confidence that has been a rarity far too often within the program in recent years. Conference play will certainly test that toughness and confidence over the next two months, but I'm very encouraged with the team right now.

Florida was a preseason top ten team, but inconsistent performances have resulted in the Gators entering conference play unranked in the polls. In Florida's defense, they've been neck and neck with Alabama for the toughest non-conference schedule. That's little consolation to a Florida fanbase that entered this season with high expectations. While the Gators remain a formidable defensive unit, inconsistent shooting - a problem they had last season - has remained a thorn in their side. Their effective field goal pct only ranks 161 in the country, and they're only making 31.2% of their three-point shots, which ranks 243. Other areas of the Gators offense has been good: they're making 51.4% of their 2-point shots; their turnover pct is only 17.6%; they're a good offensive rebounding team; and they do a good job of getting to the line. It really just comes down to shots falling for the Gators. If they can figure that part out, they may yet live up to that preseason ranking.

As I mentioned above, the Gators remain a formidable defensive unit. In the previous three seasons, Florida has finished top 25 in adjusted defensive efficiency. So far this season, they're ranked 28th in that category. This will likely be the best defensive team Alabama has seen up to this point, and maybe one of the best they'll face all season. Alabama is averaging 95.6 points in their last three games. If they come close to that number vs the Gators, the offensive basketball revolution at Alabama will truly be in effect.

Players to Watch: Jaden Shackelford is a gunner. He's got room to grow in all areas, but for now his best attribute is that he's a supremely confident offensive player that has yet to meet a shot he didn't like. Some nights that's going to result in some frustrating stat lines, and other nights it's going to result in Jaden sparking the team as he did vs Richmond. If Alabama can continue to have multiple guys on the floor that can consistently knock down shots, even a great defensive team like Florida will have their hands full.

Kerry Blackshear Jr. was the most coveted transfer in the offseason. The decision by the former Virginia Tech Hokie to transfer to Gainesville was a big factor in Florida being ranked in the preseason top ten. While the Gators as a team have had some ups and downs, Blackshear has certainly done his part, averaging 14.2 pts, 8.4 rebs, and 1.8 asts. If there was one area of criticism it would be that his shooting averages (47% FG; 31.3% 3-PT) could be better. Another would be his tendency to get into foul trouble; he's averaging 3.1 fouls per game. He's had four or more fouls in six of the Gators twelve games so far. Will Nate Oats try to attack him early as a result?

Prediction: It is my opinion that Alabama's performance in their first four conference games (at Florida, Mississippi State, at Kentucky, Auburn) could go a long way towards determining how the season turns out. The league, quite frankly, has not been great in the non-conference schedule. I'd argue that the league is wide open at the top, and Alabama is as capable as any team of making a jump up the standings if they can show their mettle against four teams that I believe will be in the mix for the conference crown. Alabama enters this game with confidence, which should serve them well on the road. Alas, my own confidence remains shaky. I keep going back and forth on this one without settling on a firm pick so I'll take the easy way out and pick the home team.