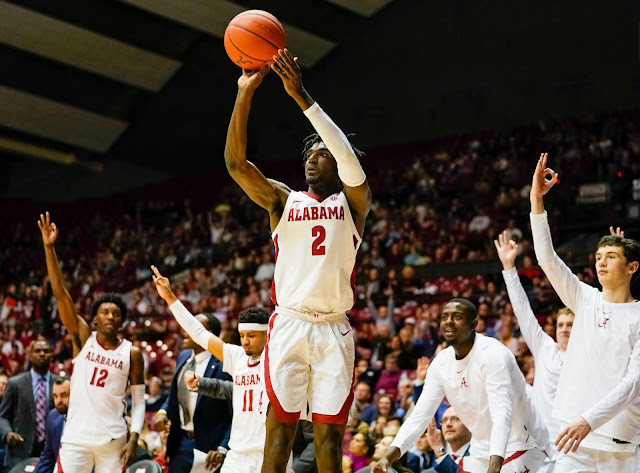 My Two Cents: Alabama has not won in Lexington since 2006, but they haven't had a team as good offensively since that season either. That may be why there's confidence among some Alabama fans heading into this one. Our guys have scored 90 or more points in the last five games for the first time in program history. In addition to the offensive upgrade, the team has shown improvement on defense, protecting the basketball and competing on the glass. They also have two possible all-conference players in Kira and JP. Only time will tell how many wins this Alabama team has in them, but I feel confident in predicting that they won't be fun to play.

John Calipari's program has faced seemingly every challenge it can face in this conference. Every time they roll into an opponents arena, it's the biggest game on the schedule; when they're at home, the expectation is that they will win, and win handily. The program always has a target on its back, and typically gets everyone's best shot. The Cats have had some ups and downs, but at this point Calipari's teams are a battle-hardened, talented unit. But they have yet to face a team that plays at the pace of Alabama.

And pace will play a big part in this game. Alabama is ranked third in tempo, while Kentucky is currently ranked 223. The Cats are certainly capable of playing at a faster pace, but they're not as deep this season, which may explain the slower pace. UK is top 25 in both offensive and defensive efficiency. While they don't do anything elite on the offensive end, they do everything well with the exception of three-point shooting (ranked 290 with a team average of 30.1).

Kentucky will pick and choose when they run. In the past, Calipari's teams at Kentucky excelled at turning opposing teams over and overwhelming them in transition, or at the rim thanks to a seemingly unlimited group of long, athletic bigs. But this Kentucky team, while it is certaintly not short on talent, is not turning teams over at the rate they have in the past, which has resulted in them facing more halfcourt defenses, which is another reason for the slower pace this season. Kentucky is still a very good defensive team, and if Alabama is careless with the basketball, the Cats will make them pay in transition. Alabama must also be good on defense. If Kentucky is efficient on the offensive end, forcing Alabama to face halfcourt defense instead of pushing the ball, the tempo will slow and the game will favor Kentucky. Kentucky will also have a size advantage in this game so, just as they did Tuesday night, Alabama must compete on the boards.

Players to Watch: All of the Bama guys that have played this season have brought something to the table, but if they're going to win in Rupp, Kira Lewis and John Petty must have impact games. Period.

Ashton Hagans (12.9 pts, 7.1 asts, 3.9 rebs, 2.1 stls) is the heart and soul of this Kentucky team. His matchup with Kira will be one of the best point guard matchups in all of college basketball. The winner of that matchup (and the pace each team wants to play at) will likely be a deciding factor in this game.

Prediction: I'm not going to predict Alabama to win at Rupp (are you nuts?), but I will say that I believe Alabama has a good chance to win this game. And I can't remember the last time I felt like that coming into a game at Rupp. Alabama's defense has been too hot and cold, particularly on the road. That may prove to be the achilles heel once again. But this Alabama team is improving, and win or lose Saturday, I'm very excited about where this team could be a month from now.