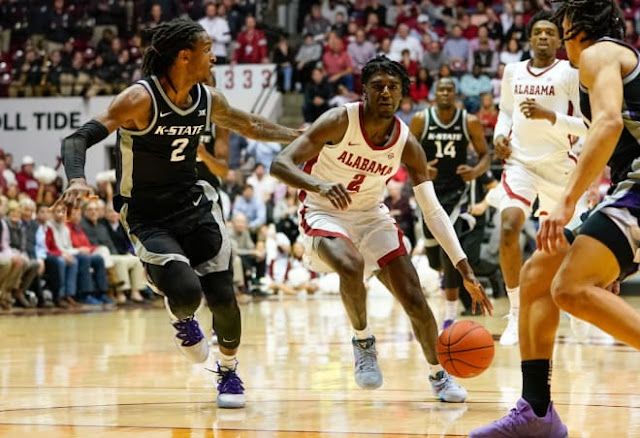 Having won eight of their last ten games, Alabama (12-7, 4-2;KenPom: 42; NET: 41) has started to pop up in the bracketology discussions that become fodder on the networks. In my opinion, it's a little early to start having that discussion, but that this team has a chance to be in tournament consideration after a 2-4 start is encouraging. Wednesday will provide a massive quad one opportunity for our guys when they travel to Baton Rouge to face the LSU Tigers (15-4, 6-0; KenPom: 34; NET: 25). Game time is 6 P.M. CT, and will be televised on ESPN2.

My Two Cents: There's plenty to be critical of Will Wade about, particularly where it concerns the allegations that surfaced during the FBI trials regarding his recruiting methods. But you have to hand it to him and this group of players: no matter how the team may have been put together, they know how to win. The Tigers are on an eight-game winning streak; six of those eight wins have been by a margin of one or two possessions. Last season, en route to winning the regular season league title, the Tigers finished 9-2 in 1/2 possession or overtime games. You can be critical of the number of close games, but you have to admit these guys are clutch when it counts.

Meanwhile, Alabama has looked just a little off since the big win at home vs Auburn. Yes, they've won all three games since Auburn - two of the games by double figure margins - but those three teams are also a combined 25-32 on the season. Turnovers, scoring droughts and being significantly beaten on the glass won't go well against an upcoming schedule that includes LSU (twice), Arkansas, Tennessee, at Auburn, and at Mississippi State.

LSU doesn't play at the tempo Alabama does (the Tigers rank 78th in tempo), but what they may lack in tempo they make up for in efficiency. The Tigers are currently ranked 4th in the country in adjusted efficiency, and also rank top 50 in effective field goal pct (40), 2-pt pct (6) and free throw pct (27). But it's their work on the offensive glass that is the key strength of this team. The Tigers rank 8th in the country in offensive rebound pct (ranked 1st in the SEC). LSU is a bad 3-point shooting team (ranked 274 in 3-pt pct), but when you can hit the offensive glass the way they can (prepare the cliche gun, commander!), a missed shot is often the best offense for the Tigers.

Defensively, the Tigers haven't been great (which likely explains a lot of the close games), but one thing they do well is limit opponent free throw attempts, currently ranked 1st in the SEC in that category (19th in the country). The interesting stat where it concerns this game is that the Tigers are currently ranked last in the league in opponent 3-pt pct (37.2%). Alabama will likely get open looks on Wednesday night; can they knock them down? Both teams also struggle to force turnovers (Alabama is ranked 9th in the league in defensive turnover pct; LSU is ranked 12th) so of course we'll probably get a sloppy, turnover-filled game. But if both teams stay true to those numbers, we could be in for a up and down, defense optional, shootout type of game.

Players to Watch: For Alabama to win this game, everybody that plays will need to do their part on the glass. If LSU decisively wins the rebounding battle as K-State did on Saturday, I don't see how Alabama can win this game.

I don't know why I haven't heard Skylar Mays (15.7 pts, 4.8 rebs, 3.4 asts, 2.1 stls) name more when it comes to SEC Player of the Year consideration. The senior guard is a fantastic player that can score in a variety of ways, never gets sped up, and, on a team of clutch performers, may be the most clutch.

Trendon Watford has had a strong freshman season in Baton Rouge (13.2 pts, 6.8 rebs, 1.8 asts). It still hurts that the Birmingham native, once considered close to a lock to play college basketball in Tuscaloosa, chose to go elsewhere. I'm guessing he'll have some extra juice on Wednesday night.

Prediction: This game won't make or break Alabama's season, but a quad one road win would certainly help the resume. While LSU has been uncanny in how successful they've been in close games, the fact they've been in so many close games suggests that Alabama keeping this close to give themselves a chance to win isn't implausible. After a trio of flawed victories, I think our guys show up ready to play. Unfortunately, they fall short in another close win for the Tigers.