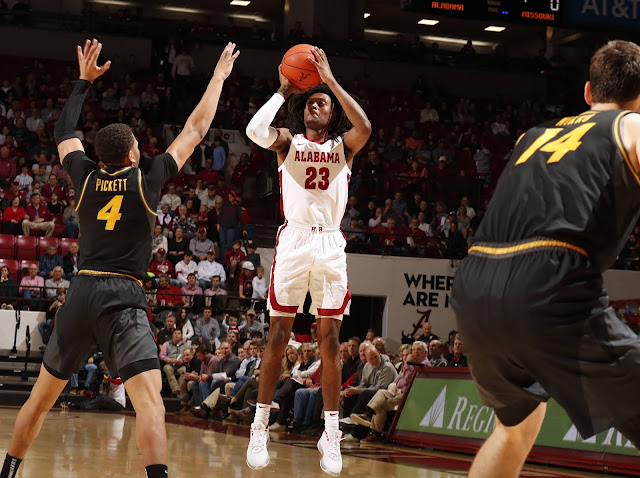 My Two Cents: The Dores are going through what you might call a bad stretch in the last two seasons and change. Vandy hasn't beaten an SEC opponent, including the SEC tournament, since March 3rd, 2018. That's twenty-four straight losses vs league competition. Ouch. In addition, last season and earlier this season, the program's best player (Darius Garland in 18-19; Aaron Nesmith this season) was lost to season-ending injuries. Garland elected to enter the NBA Draft despite his injury; and Nesmith, projected as a first-round draft pick in some mock drafts, may have also played his final game in a Vanderbilt uniform. In his absence the Dores have gone 0-3, losing those games by an average of twenty points. Ouch. To add insult to injury: in their previous game vs Tennessee, Vandy's 34-year streak of at least one made three-pointer per game came to an end with an 0-25 performance. Ouch. After the program fired former coach Bryce Drew, hiring an experienced coach to at least play the role of caretaker for a few seasons may have been the best call. Instead, Vandy hired a first-time college head coach in Jerry Stackhouse. The future is not yet written for Stackhouse in Nashville, but this season certainly doesn't appear to have a happy ending.

Nesmith was putting together an all-conference type of season when he was injured. With him, Vandy's offensive numbers were solid. Without him, their numbers have plummeted. In league play, the Dores are first in the league in free throw rate, but low in pretty much every other meaningful stat such as effective field goal pct (14); turnover pct (13); offensive rebound pct (13); 3-pt pct (14); 2-pt pct (10); free throw pct (10), etc. It isn't much better on defense, with one exception: they're ranked 2nd in the league in 3-pt pct defense (25%). That obviously could play a factor vs a team like Alabama that wants to take and make threes.

Players to Watch: Despite having to deal with nagging injuries most of the season, Alex Reese has had a very solid junior season. He's averaging just under double figures in scoring (9.6), and is second on the team in 3-pt pct (36.5%). But it's been his improvement on defense that has been the most encouraging to me. He also plays with a lot of energy, and he's provided a spark for this team in many instances. Just this past weekend vs Missouri, it was his performance in the first half that helped Alabama take control early and maintain the lead going into halftime. And the fact that he's continued to play through the bumps and bruises he's endured this season should dispel any of that talk coming from some that he was soft. Along with Kira, JP, and Herb, he's part of a strong foundation for this team.

With Nesmith out, much of the scoring and leadership responsibilities appear to have fallen on the shoulders of Saben Lee. The junior guard is averaging 15.7 pts, 4.8 asts, 3.2 rebs, 1.4 stls, and is making 50.3% of his field goal attempts. However, if Vanderbilt is going to halt their SEC losing streak on Wednesday night, someone else will have to step up and give Lee some consistent help.

Prediction: We all know the history that Alabama has had in Memorial Gym, but if Alabama wants to have any shot of playing meaningful postseason basketball, this is a game they must win, regardless of the venue. Vandy's current NET ranking makes this a quad 3 game. Alabama already has one quad 3 loss (North Carolina) as well as a quad 4 loss (Penn). They simply can't afford any more of those types of losses.