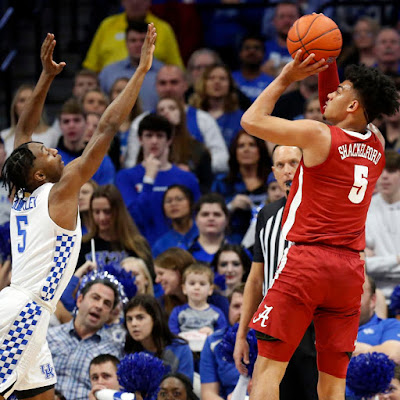 The beginning of conference play for Alabama (8-7, 1-2; KenPom: 53; NET: 60) hasn't been without struggle, but the team is clearly improving. The next step is achieving a signature win. The Auburn Tigers (16-0, 3-0; KenPom: 16; NET: 6; AP: 5) would definitely fit the bill. A season after making its first Final Four in program history, the Tigers are currently one of two unbeaten teams remaining in college basketball. Game time on Wednesday night is 8 P.M. CT, and will be televised on ESPN2.

My Two Cents: This is a big game for Alabama for several reasons: 1) a win would count as a quad one win for Alabama 2) a win would even up the conference record 3) it would provide a boost to a fanbase that is excited by the improvement on the floor, but not always in the win/loss record, and 4) Alabama needs to reassert itself in this rivalry as Auburn has swept them in two of the last three seasons.

It won't be easy. Bruce Pearl is a conceited, self-promoting buffoon with a questionable history of conduct when it comes to the NCAA rulebook, but there's no question that he can build a program. What he's done at Auburn - a program with little to no sustained success - is incredibly impressive, regardless of how irritating a personality he is. While basketball doesn't command the same type of attention as football, any coach at the University of Alabama (and certainly Auburn) is going to have a short tenure if he or she doesn't have some measure of success in this rivalry.

While Auburn has been impressive this season no doubt, it's not unfair to question their schedule up to this point. The Tigers only played one high-major team (N.C. State) in the non-conference, and they had the luxury of playing that one at home. In fact, one could make a strong argument that their best win to date has been a road win at a Mississippi State team that is currently 0-3 in conference play. To put it another way: does anyone really believe Auburn would be undefeated if they played road games at, let's say, Rhode Island, Penn State or took part in the Battle 4 Atlantis? Maybe, maybe not.

To Auburn fans reading this, relax. I'm not saying your team is bad. Far from it. The stats show quite clearly that Auburn is a good team. They're top 50 in both adjusted offensive efficiency (14) and defense (34). On offense they rank well in the following categories: effective field goal pct (41); turnover pct (79); offensive reb pct (8); free throw rate (10); and 2-pt pct (3). Surprisingly, they're not a great three-point shooting team (32.1%, which ranks 220); and, despite their high free throw rate, they're only making 65.7% of their foul shots. Defensively, they're solid to good in all categories. Not quite as good as last season when they were one of the most elite teams in the country in forcing turnovers, but still a very good defensive team.

Rebounding and second-chance points could be the key stat to watch in this game. Auburn's perimeter shooting may not be as overwhelming as it was last season, but they've made up for it with their success on the offensive glass. Just as they did in the Mississippi State and Kentucky games, Alabama will have to compete on the glass in order to win this game. My biggest concern for Alabama on the defensive end is their inability at times to defend the drive and limit points in the paint. Auburn's point distribution makes it pretty clear to me that Auburn wants to do most of their scoring inside the three-point line (49.2% of their scoring is 2-pointers). Alabama will likely have their hands full limiting Auburn's point production from two so they need to hope the three-point percentage, unlike the Kentucky game, is in their favor. It also goes without saying that if Auburn is shooting the three well to complement their two-point production, Alabama has no chance to win this game. Defensively, Alabama needs to force some turnovers in an effort to create transition opportunities, and get the Auburn offense out of rhythm. Unfortunately, our guys have been among the worst in the conference in defensive turnover pct (11) and steal pct (14). They have to improve in that area.

Players to Watch: Herb Jones was very aggressive on offense in Lexington. Maybe too aggressive. If you're going to take twenty shots, you need to make more than eight. Even more so when most of those attempts are at the rim. Herb struggles to finish at the rim largely because of contact. For a guy that has led the team in charges each season of his college career, it's odd that he seems to shy away from contact on the offensive end. Kentucky's size and length was obviously a factor in his misses. But if Herb is going to be that aggressive taking the ball to the rim, he needs to absorb the contact and finish through it or go to the foul line.

Auburn has several guys that could impact this game so it's hard to pick just one. Austin Wiley's size inside will be difficult to defend; Isaac Okoro is a versatile player that seems likely to be a future draft pick; Danjel Purifoy and Anfernee McLemore are the x-factors for this team.  But for this game, I'm going to focus on the Auburn guards. This Auburn team doesn't have quite the same sizzle at guard that they did last season with guys like Jared Harper and Bryce Brown. But basketball is a guard's game, and the impact of Samir Doughty, J'Von McCormick, and Jamal Johnson (a 44.4% three-point shooter whose father just happens to be Buck Johnson, a former Bama basketball star) on this game will play a large part in determining the final score.

Prediction: I don't want to be emotionally invested in this game. After all, Auburn is the better team/program right now with an experienced lineup. But I must admit: I am emotionally invested in this game. I have never wanted an Alabama basketball team to win a game more than I do this one. Yes, that's hyperbole; Alabama has been in much bigger games than this in its history. But being an Alabama basketball fan for as long as I have - and hoping to see the men's team make a Final Four for as long as I have - watching Auburn make that run last season was as frustrating of a basketball experience as I can remember. And, if we're being brutally honest, they should have been playing for the national title. Can you imagine if they made it to Monday night and had won a title....in basketball. I may have stopped watching basketball all together if that had happened. To rub salt in the wound, Alabama was flaming out in the first round of the NIT and preparing for another coaching change. As long as Bruce Pearl is at Auburn, that program will be good. And I'm okay with that as long as Alabama can counter with a strong program of its own (without the added drama of FBI investigations, suspended players and possible NCAA investigations of course). Wednesday night is a great chance to take a step towards that reality. Beat an AP top five team that's one of the last unbeaten teams, and you're going to receive some positive attention. Alabama has been playing well in recent weeks, but without a breakthrough win to really galvanize things. It's time to add that accomplishment to the list.