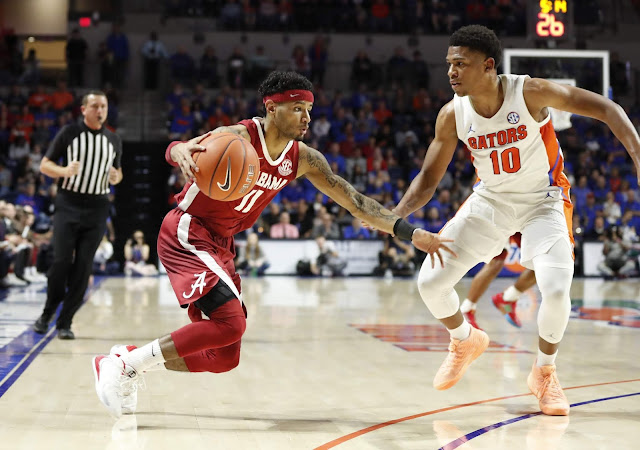 Sports can be cruel, that's for sure. In my time as an Alabama basketball fan, which is decades at this point, I've seen my share of heartbreaks on the hardwood. This past Saturday may be in the top ten of those types of defeats, because the team did so many things right before the game got away from them late. Unfortunately, that's the nature of things sometimes. Now Alabama (7-6, 0-1; KenPom: 57; NET: 63) must recover quickly, and not allow Florida to beat them twice. That chance comes on Wednesday night when the team hosts the Mississippi State Bulldogs (9-4, 0-1; KenPom: 52; NET: 76). Game time is 6:00 P.M. CT, and the game will be televised on the SEC Network.

My Two Cents: 7-6 is not where any of us hoped the team would be through thirteen games, but it's not a record that has left me despondent. You can see the team improving and developing an identity in the process, and that's been encouraging. Watching the Florida game a second time, I can honestly say that the outcome of that game had much more to do with the Gators than our guys. With the exception of how Alabama used its last timeout, I really have to tip my hat to the Gators for the way they played in the second half. Our guys stymied their runs time after time, only for Florida to respond with big plays down the stretch. For two teams that had been struggling to establish their identities early this season, the performance of both should be encouraging. To me, the biggest play in the game after the steal and layup to tie the game in regulation was a three pointer made by Florida in the previous possession. Alabama led by five at that point, and if Florida doesn't make that shot, the game is likely over. Sometimes the other team makes plays, and you have to just move on.

While Mississippi State may have the more attractive record at 9-4, they've had their share of struggles. Their best win to date is over Kansas State, currently ranked 87 at KenPom. Despite a quick start this past Saturday vs Auburn, State quickly turned into a disorganized mess on the floor and ultimately lost by 12. The Bulldogs have arguably the most talented big man in the league in Reggie Perry, but the guard play has been erratic thus far, resulting in State's turnover percentage being ranked 308 in the country at 22.3%. Alabama isn't much better ranked 242, but at least we've seen signs of improvement there.

State is the best team in the country on the offensive glass with an offensive rebound pct of 40.8, but in a further example of how inconsistent they've been, they're ranked 279 in defensive rebounding pct. Alabama doesn't need to win the rebound stat, but they have got to compete on the glass. Both teams are top 50 in adjusted offensive efficiency so the team that creates more possessions via rebounds or turnovers will be tough for the other team to stop.

That's because neither team has been great overall on the defensive end. Alabama has shown some improvement on defense in recent games, but they reverted to some bad habits in the second half on Saturday when Florida decided to get the ball into the paint. The lack of size became more apparent, but our guys also struggled to contain the Florida guards when they drove. That opened up the floor, and Florida took advantage. State has length so they've been a good shot-blocking team (13th in the country in block pct), but they haven't really stood out in any other area on defense. Due to State's length, our guys will struggle to get good looks at the rim so a good shooting night from the perimeter will be necessary.

We know our guys can score, they're averaging 83.9 points per game. They're also giving up 80 points per game. Some of the defensive struggles start on offense with the turnover issues, but our guys have also struggled to force turnovers when they're on defense. Alabama is ranked 266 in defensive turnover pct. When you're turning the ball over on offense and failing to create turnovers on defense, that's not a winning formula. We've seen this team show improvement with the offensive turnovers in recent games, and now they need to become more disruptive on defense. No time like Wednesday night vs a team with 300+ ranked offensive turnover pct.

Players to Watch: Javian Davis, Galin Smith, and Alex to a lesser extent, are pretty much it from a size standpoint. Both Davis and Smith fouled out on Saturday, which, along with Herb fouling out, sealed the team's fate. Javian and Galin don't need to have career nights on Wednesday, but they've got to be a presence inside to help offset State's length and power around the rim. Staying on the floor is the first step in accomplishing that.

If the State guards can be disciplined on the offensive end and run the offense through Reggie Perry (15.8 pts, 10 rebs, 2.5 asts, 1.3 stls, 1.2 blks), he should dominate. Quite frankly, Alabama has no one that can physically match up with him if he catches the ball in the paint.  That's why forcing the State guards into turnovers will be crucial for Alabama in this game. Perry isn't a typical big. While he's obviously at his best when operating in the paint, he's also a very effective ball-handler for someone his size (6'10, 250) and can lead the fast break if necessary. Honestly, the defensive gameplan for Alabama should focus less on Perry (they don't have an effective way to guard him, in my opinion) and more on limiting everyone around him in an effort to make him less effective.

Prediction: With both teams entering with 0-1 conference records, this game has added punch. One of the biggest issues for Alabama during the Avery era was the inability to protect the home court, particularly during conference play. Alabama has only played five true home games this season, and they're 4-1 in those games, with the lone loss in the season opener. The next two games on the schedule are at Kentucky and a home date against a top ten Auburn team. This game is crucial for Alabama if they want to avoid an early hole in conference play. State presents some real matchup concerns, but I'm going to go with my heart in this one.