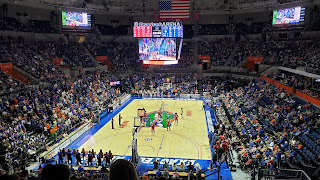 Alabama blew a huge first half lead to fall to 7-6 (0-1) on the season.  I'm not as upset about blowing the lead as I am that we failed to finish.  Florida is a good team, and our style of play is going to result in a lot of runs by both teams, so it seemed inevitable that they would get back in the game.  We simply didn't finish, and I'm not just talking about the disaster that was the final minute of regulation.  We didn't finish at the rim by missing way too many layups.  We didn't make enough free throws when given the chance, and obviously we didn't finish the game.

A lot of good things happened before it all fell apart.  Galin was in the starting lineup, I assume because Alex was sick, but it may have been that Coach Oats wanted some size to match-up with Blackshear.  Beetle and Shack provided a spark off the bench and we went on a huge run to take a 21 point lead.  The 3s were dropping and our defense was forcing Florida into bad jump shots that weren't falling.  Florida closed the half strong to make it a 46-32 game at halftime.  We had taken their crowd completely out of the game, several people commented to us during the break with some variation of , "man, you guys are kicking our butts!"  My response was, "you guys finished strong and there's a lot of basketball left."

Give Florida a lot of credit, they made the plays in the end when they had to, and they kept fighting when there were several opportunities to throw in the towel.  They went on a run to start the second half to cut the lead to 6, but we answered and got it back up to 12.  Florida did a much better job defensively of running us off the line and slowing the game down in the second half.  While it felt like we were losing control, it seemed every time Florida would get within striking distance, JP or Kira would come up with a big shot and we would extend the lead back to a comfortable margin.  We led by as many 8 with less than 3 minutes remaining.  JP gave us a 5 point lead with only 30 seconds remaining, but Florida answered with a 3 and  called a timeout.  We threw the in-bound pass to Kira, who inexplicably immediately called our last timeout.  From my vantage point, it looked like he had room to advance the ball  up the court down the sideline.  We thought perhaps Oats had instructed him to call a timeout because they wanted to run a side-out play, but that would be insanely risky given that we would have to in-bound the ball again with no timeouts.  Based on post-game comments, that was not the case, and Coach Oats also thought Kira should have attempted to advance the basketball.  He would have likely been fouled, and then it would have came down to free throw shooting.  Instead, we failed to get the ball in-bounds, and Florida scored off the turnover to tie it up.  We got a couple of good looks at the buzzer, but they wouldn't fall so we went on to overtime.

With Florida having all the momentum and the Tide in some serious foul trouble, the outcome seemed predictable.  We battled through the first overtime and JP made a corner 3 with 10 seconds remaining to force a second overtime.  Any remaining hope was gone when Herb joined Galin and Davis on the bench with 5 fouls.  Florida made their free throws at the end to close out the game, and that was that.

With both bigs fouling out in a combined 30 minutes of play out of a 50 minute game, we really struggled to contain Blackshear, who managed to play with 4 fouls for over 20 minutes.  Herb did a good job with him until he also fouled out in the 2nd overtime, and Alex was evidently sick and he made several trips to the locker room.

This was my first trip to Exactech Arena at the O'Connell Center (really, Florida, enough with cramming a million names into your facilities..."Steve Spurrier Florida Field at Ben Hill Griffin Stadium" as another example) since they renovated it a couple of years ago.  The renovations improved it from "God Awful," to more or less "SEC average."  They have a nice new main entrance, and they actually have permanent seats now with backs and cup holders.  They also have a real concourse with adequate concessions and restrooms, before they just had small lobbies in the four corners.  They added a center-hung scoreboard and video board that has the teams foul information in a convenient place.  The scoreboard is very similar to ours in terms of quality and I believe that ours is dated and due for an upgrade.  All of these are welcome improvements and they at least have a serviceable gym now, even if it's still not in the upper tier of nicest arenas in the league.

The renovations lowered capacity to a little over 10,000.  It wasn't a sellout, but was a very good crowd with close to 8,500 in the house.  There were no more than 25 Bama fans scattered throughout.  I was impressed that their student section was nearly full despite the fact that classes have not resumed from winter break yet.  During the first half, it was one of the quietest crowds I've ever heard, but they got loud when UF made their runs in the second half, and I think their team fed off their energy down the stretch.

99% of the Gator fans were great, so of course I'm going to tell you about the other 1%.  There was an older couple sitting in front of us, and at one point in the second half the man got up and walked to the concourse, I assumed just going to the restroom or concessions.  The lady turned around and said, "I want to tell you something, when you are sitting around everyone who's for the other team, and you're yelling and cheering constantly, it's rude and disrespectful."  I replied, "I'm sorry, didn't intend any disrespect, but we're just cheering for our team, we haven't cursed or said the first negative thing about Florida." She said, "well, he couldn't take it any more (referring to her, I presume husband who had just departed) so now we're having to leave.  You're even intimidating the kids sitting in front of us.  I just hope you'll be nicer to those still here."  Now, I don't deny that I'm a bit...vocal...during basketball games, but I do try to tone it down a bit on the road and I'm certainly not going to trash talk or be mean to the host fans.  For the record, after they left the gentleman sitting behind us tapped me on the shoulder and said, "Hey, just wanted to let you know, from where I'm sitting you guys haven't been disrespectful at all.  We're glad you're here."  Everyone else around us, including the parents of the kids we were supposedly "intimidating," shook our hands after the game and wished us well. 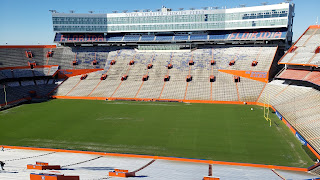 One of my favorite things about Florida is that they leave the football stadium open for public access.  It's a great place to work out, I incorporated a lap around the concourse and some stadium steps into my Sunday morning run.  There are 90 rows in the main bowl, in case you were wondering.

Up next, we return home to face the Mississippi $tate bulldogs Wednesday night.  Tip off is set for 6pm on the SEC network.  Long time readers of the blog will know how important this one is to me.  Let's have a good crowd and help the team get back on track.