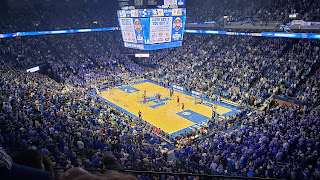 Alabama died by the 3 in Lexington to fall to 8-7 (1-2).  Give Kentucky and Coach Cal a lot of credit for limiting our production from behind the 3 point line.  Alabama did nearly everything else they had to do to win this game, but could not overcome a woeful 4 for 21 performance from downtown.

I actually thought we played pretty good defense, but Kentucky did a good job of taking what we gave them.  You sort of have to pick your poison against a team with so many weapons, and we generally allowed them to take jump shots.  I was encouraged by the number of mid-range jumpers they were taking, as that's generally the worst shot in basketball, except for the fact that they made nearly every one of them.  They aren't known as a great 3 point shooting team, so of course they made 9 of 15 against us.

A big part of our poor shooting was due to Kentucky's game plan to run us off the 3 point line.  Still, when we did have open chances in transition, we didn't take advantage.  We got enough stops and rebounds to hang in the game, but still trailed by 10 at halftime.  They stretched the lead to 15, but our guys never quit and scrapped their way back into the game.  JP heated up a bit in the second half, and we were able to pick up the tempo and take advantage of some nice backdoor cuts as we clawed back into the game.  With around 4 minutes left in the game Herb missed an open 3 from the corner that went in and out that would have cut the lead to one.  We still only trailed by 4 in the final minute, but Kentucky ran a great play out of a timeout to make a corner 3 to go up by 7 and that more or less put the game away.

The stats are a bit misleading in this one.  Herb was our leading scorer with 18 points, 4 assists, and one turnover with seven rebounds, and while he did a great job on the boards, played awesome defense including taking a couple of charges, and played with great effort, he was a liability on offense for stretches of the game.  He was 8 of 20 from the field, and most of those 12 misses were in the paint.  In fairness, they were contested for the most part, but he's just not good at finishing near the basket, and we can't have him taking 20 shots right now.  With a few glaring exceptions, UK's help side defense was good, and Kira and JP just don't have the size or strength to finish over Kentucky's bigs, and with the 3's not falling and UK not collapsing their defense, that meant Herb taking and missing a lot of layups in traffic.  Beetle struggled going 0 for 6 and Shack only took one 3 in 18 minutes of play.  Again, this goes back to Kentucky's game plan of over-playing the perimeter.  I thought Jaylen Forbes played well in his 3 minutes and he made his only 3 point attempt of the game.  With his size, perhaps he should have taken some of Beetle or Shack's minutes in this one.  I know his first step isn't the quickest, but I would have at least given him a chance to show what he could do on the dribble drive.

JP had 16 points and 7 rebounds.  One of those rebounds was probably my favorite play of the game.  JP took a long 3 from the wing, missed it but followed his shot and got an easy rebound and put back.  It was obvious UK didn't want to run with us, and that allowed him to crash the boards.  I love that our system allows the guards to crash the boards and I would like to see our wings following their shot more.  Anybody who has played the 2 guard knows that you normally know where your misses are going before anyone else.  In general, I thought our effort was fantastic.  We were even on rebounds despite them being the larger and more athletic team, and we out-hustled them for several loose balls.

Kira was also in double digits with 10 points and led us in rebounds with 8.  We only had 8 turnovers, so the trend of improvement in that area is a positive sign.

The place was packed as usual, and they have replaced the upper level sideline bench seating with individual chair-back seats, but we still had the dreaded benches behind the basket and in the corner.  The UK fans we talked to are NOT happy with the renovations as that lowered the capacity by 3,000 or so.  I will say that our corner, bench seats did not seem as cramped as the higher level seats we've had there in years past.  The capacity there is now around 22,000, and it was mostly full except for a few empty seats in the very upper rows.  As usual, the UK fans could not have been more welcoming and classy.  They were knowledgeable and generally curious about our team, asking a lot of questions, and complimentary of our team and effort in general.  I know this isn't a popular opinion, but I really respect their program and their fanbase and wish them nothing but the best.

Normally I am checking stats and other scores on my phone during timeouts, but both my girlfriend's and my home were either in or near tornado warnings during the game, so we were both checking our radar apps and twitter for damage reports throughout the game.  Thankfully everything ended up being fine but it certainly added another layer of stress and distraction.  I hope all of our readers made it through the storms okay.  The drive and up back was miserable, with heavy downpours and rains adding at least an hour each way.

Up next, 5th ranked and undefeated auburn comes to Tuscaloosa to suffer their first loss of the season.  Yeah, I'm calling it.  It will go down Wednesday night at 8 p.m. on ESPN2.