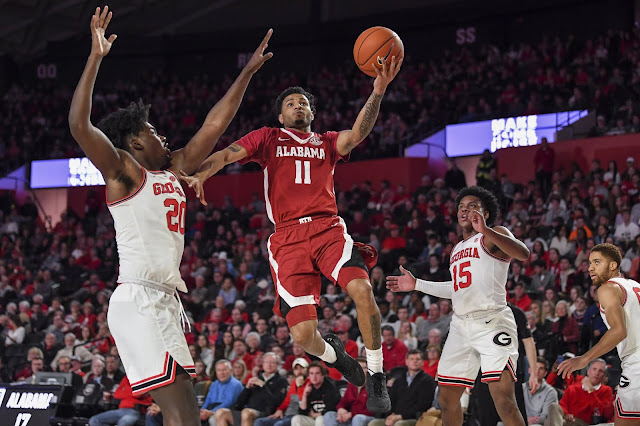 My Two Cents: 21-2 is 21-2, don't get me wrong. But it's worth pointing out that the computers don't love Auburn. Despite their lofty record, they're only ranked 30th at KenPom and their composite ranking when taking all of the metric sites into consideration is just 15. It should be pointed out here that Auburn does have the highest composite ranking of any team in the league, but it's rare for a power conference team with Auburn's record to be ranked outside the top 10. To their credit, Auburn has found ways to win games this season. In recent weeks, they've overcome double digit second half deficits in games at Ole Miss, Arkansas and at home this past weekend vs LSU. All three of those games went into overtime. For the season, Auburn is 4-0 in overtime games. In games decided by 1-2 possessions, the Tigers are 5-0. In the least surprising news where it concerns an Auburn athletic team, this Tigers team is ranked 1st in the country in KenPom's "Luck" metric......because of course they are. Alabama is ranked 326 in the country in that same metric.

This is a different Auburn team than a season ago, and Bruce Pearl should be credited for making the necessary adjustments for this team to be successful. The biggest difference in this team is they are not the elite 3-pt shooting team they were a year ago; they are currently ranked just 260 in 3-pt pct at 31.6% (though they did knock down 18 in the win vs LSU on Saturday). Where they excel on offense this season is inside the three-point line, ranking 32nd in 2-pt pct at 53.4%. They crash the offensive glass, ranking 14th in the country in offensive rebound pct. They also get to the free throw line a lot, ranking 4th in offensive free throw rate (though they are only making 67.4% of those attempts). Alabama has struggled on defense in three main areas: defending the drive, rebounding (268 in defensive rebound pct) and a high foul rate (224 in opponent free throw rate). If our guys can't shore up at least one of those three issues by Wednesday, it's going to be another long night in Auburn Arena.

Defensively, the Tigers aren't elite, but they're solid to good in all phases with the exception of steal pct. Last season, the Tigers finished 2nd in the country in that stat; this season, they rank 219 in that category. That's good news for an Alabama team that can't get out of its own way sometimes when it comes to turning the ball over. However, assuming that the atmosphere is hostile against Alabama for this game, my guess would be that Auburn will come out aggressive on both ends in an effort to put Alabama on the ropes early. The slow starts and ends to halves that Alabama has struggled with cannot be an issue in this game.

Players to Watch: Beetle Bolden has been limited this season by injuries and illness. You name it, he's had to deal with it. But when he's been able to be semi-healthy, he's been a presence on the floor, bringing much-needed energy on both ends. At times, he tries to do too much and either turns it over on offense or gets in foul trouble on defense. He was impactful in Alabama's victory on Saturday and they'll need him to do it again this week, particularly on the defensive end against the Auburn guards.

Freshman Isaac Okoro has been the x-factor for this Auburn team. Averaging 12.9 pts, 4.6 rebs, 2.1 asts, 1 stl, and 1 blk, Okoro has not only elevated this team with the different ways he can impact the game, but in the process he's now projected as a first round draft pick should he choose to go that route after this season.

Prediction: Alabama has lost in their last four trips to Auburn by an average of 16.5 points. Give Auburn fans and students credit: they have turned that arena into one of the toughest spots to play in the league, if not the country. The fact that Alabama torched Auburn in the first matchup means the Auburn fans will be even more up for this game than usual. To beat Auburn on their home floor, you almost have to play a perfect game. Alabama is far from perfect.