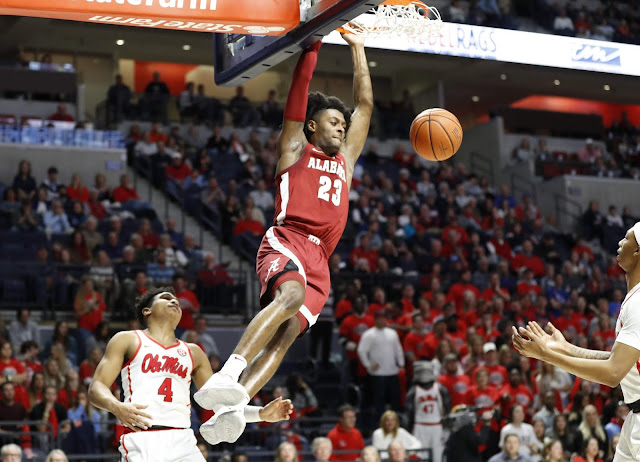 Alabama (15-12, 7-7; KenPom: 46; NET: 40) picked a good time to have one of their better efforts of the season, walking out of Oxford with a 25-point win. The victory keeps their NCAA Tournament hopes alive as we look ahead to the final two weeks of the regular season. Next up is a second meeting with the Mississippi State Bulldogs (17-10, 8-6; KenPom: 53; NET: 56). Game time Tuesday night in Starkville is 8:00 P.M. CT, and will be televised on SEC Network. Alabama won the previous meeting by a score of 90-69.

My Two Cents: Both teams enter this game in need of a win for their postseason resumes. State has won 17 games, but, aside from a road win at Florida, there isn't much meat on the resume. It may be the last opportunity Alabama gets for a quad one win so they need to take advantage.

While Alabama has cleaned up their turnovers in league play (an offensive turnover pct of 17.6%, which ranks 4th in the league), the Bulldogs have struggled turning the ball over. State currently ranks 11th in offensive turnover pct and 13th in defensive turnover pct. This seems obvious but I'll write it anyway: it's hard to win consistently when you're turning the ball over, while also failing to force turnovers. And State's steal percentage numbers on offense (ranked 13th in the league) suggest that Alabama will have opportunities at live ball turnovers if they play with the same intensity on defense that they did at Ole Miss.

Rebounding will also be key in this one. The Bulldogs are ranked 2nd in the league in offensive rebound pct, and 2nd in defensive rebound pct. One of the keys to Alabama's win in the first meeting was they were +4 on the boards. Our guys are currently ranked 11th in both rebounding categories so they will be challenged yet again to hold their own on the glass against a much bigger team.

Alabama had arguably their best offensive performance at Ole Miss because they remained aggressive on that end of the floor, never settling as they did vs A&M. On Saturday, our guys took 37 two-point shots, 29 threes, and had 28 free throw attempts (they only made 57%, but at least they got to the line). Compare those numbers to the A&M game (15 two-point shots, 44 threes, and just 9 free throw attempts). This Alabama offense is among the best in the league, but only if it's forcing opposing teams to guard it in different ways. In the first meeting vs State, our guys had 33 two-point attempts, 24 three-pointers, and 34 free throw attempts. More of that, please.

Players to Watch: I hate to be Captain Obvious again, but this Tide offense really hums when Kira Lewis is playing at a high level. He had a double-double at Ole Miss, finishing with 17 pts and 11 assists. But the key stat was zero turnovers. This has been a struggle for him at times (ten games with five turnovers or more), and the struggles of your point guard will typically filter down to other players. In games where Kira commits three or fewer turnovers, the team average per game is 12.4 with a win/loss record of 8-5. In games where he averages four or more turnovers, the team average is 16.9 with a record of 7-7.

Reggie Perry gets most of the press for State, and he could be SEC Player of the Year, but another important player for this team is guard Nick Weatherspoon. He missed the first ten games of the season, but through the seventeen games he's played, he's averaging 11.9 pts, 4.4 asts and 3.6 rebs. His shooting numbers have dropped from last season (FG%: 47.6% to 45.1%; and a massive drop from three, 38.5% to 19%), which could stem from his late start to the season. But for a team light on guards, Weatherspoon's performance down the stretch will go a long way towards determining State's postseason destination.

Prediction: I think DJC may have been onto something. He posted a comment to my Ole Miss preview, jokingly predicting that Alabama would win the next three games (Ole Miss, State and Carolina) before losing their final two games to Vandy and at Missouri. Seems crazy, right? Then again, it is February so anything is possible when it comes to Alabama. So yeah, I'd like to thank DJC for making this prediction easier.