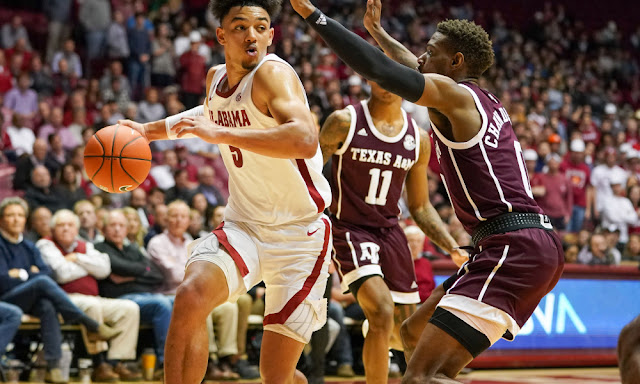 The familiar sound of bubbles popping in February could be heard loud and clear in Coleman Coliseum on Wednesday night. The idea that the team's bubble is burst may be premature given there are a few weeks left in the season, but Alabama (14-12, 6-7; KenPom: 55; NET: 44) did itself no favors in losing at home to a Texas A&M team with a triple digit NET ranking. The result was a second (for now) quad three loss for the team. With road trips looming to both Mississippi schools, our guys have put their backs, once again, against the wall. If they don't pull out of this tailspin (losers of five of their last seven) soon, even the NIT won't be an option come March. Next up: a trip to Oxford to face the Ole Miss Rebels (13-13, 4-9; KenPom: 85; NET: 86). Game time on Saturday is 7:30 P.M. CT, and will be televised on the SEC Network.

My Two Cents: I've used the analogy before that being an Alabama basketball fan is like being in a bad relationship. You have feelings for the person, and you hope that the relationship will turn a corner. But it never does, becoming more harmful the longer it continues. I'm not going to break up with Alabama basketball, but situations like the one we saw on Wednesday night are comically absurd at this point. I've been critical in the past of fan support for basketball, but how can anyone honestly expect fans to keep supporting a program that consistently rips their heart out?

It's been a tough season for the Rebels, but they have been playing better in recent weeks, particularly at home. Ole Miss already has home wins over SEC bubble teams Florida, Mississippi State and South Carolina. They also had Auburn down 19 points before the Tigers rallied to win the game in overtime. Alabama has not been successful in Oxford (last win there was in 2009), and haven't been a great road team this season (2-6 in true road games, not counting the "road" game vs Samford).

Speaking of threes, Alabama needs to chill just a little from the three-point line. In two games this season (at Auburn and Texas A&M), Alabama made a total of 38 threes and lost both games. Some of that was due to continued struggles on the defensive end, but the lack of aggressiveness on offense also played a part. DJC broke Wednesday's game down so I encourage you to read his recap asap if you want a more detailed analysis. All I'll say is that you have to create balance on the offensive end. Three-point shots are great, but you have to get some production in the paint, and you have to get to the free throw line. Alabama only had nine free throw attempts on Wednesday, and it wasn't because of officiating. It seemed like the team got gun shy after some charges were called, some shots were missed after contact without whistles, and shots were blocked. The worst thing that may have happened was the three-point barrage they had in the first half. They seemingly became too comfortable with the three as a result and stopped attacking the A&M defense. The Aggies are good defensively, but Alabama made it easy for them by jacking up 44 three-point shots.

Players to Watch: I'm not going to focus on an Alabama player for this post. Instead, I'm going to focus on the Alabama coaching staff. I hate to say it, but Buzz Williams and his staff coached circles around our guys. I don't believe that Nate Oats has been "out coached" often this season, but there have been times where I'm reminded that he's a relatively young head coach that has yet to coach at a high-major school before this season. He did an amazing job at Buffalo, but night after night in the MAC is much different than night after night in the SEC. Even more so now when you consider the coaching depth in the league. In my opinion, he's got to get better with his timeouts management; making in-game adjustments (call a timeout coach and instruct the team to stop relying on threes and get the ball in the paint); do a better job of protecting his players in foul trouble; and for god's sake, play a little zone once in a while. It's just stubborn not to play some zone, particularly when your players have consistently struggled to defend dribble penetration and closing out on shooters. I believe Nate has done a good job creating an identity for this team, having them prepared most nights, and has a much better understanding of a rotation than what we saw in the previous four years. It's also seems like he's going through a learning curve in his first season at a high-major. I believe he's going to figure it out - he seems like a very smart guy - but it'll be interesting to watch how he and the staff manage this team in the final weeks of this season.

Ole Miss has had their struggles, but Breein Tyree is having a first-team all-conference type of season nevertheless, averaging 20.3 pts, 3.7 rebs, 2.5 asts, 1.3 stls,  while shooting 37.5% from three. He's the type of guy that can hang 40 on you if not contained (just ask Ben Howland).

Prediction: For all of the bubble talk entering Wednesday night, the fact that Alabama had lost four of their previous six games should have been an ominous warning. I got swept up in the LSU win and the Herb Jones performance, and I was dumb enough to think this program was ready to turn the corner. I'm not making the same mistake for this game.