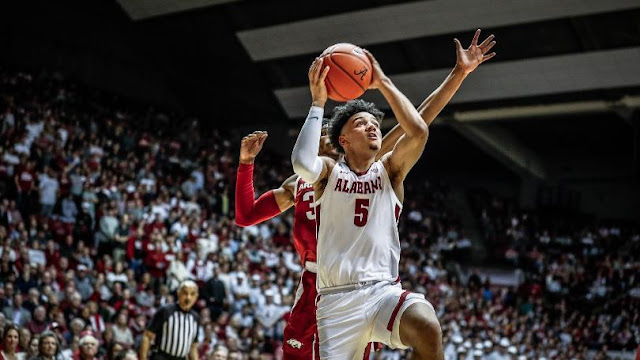 If one were to meet someone that believes the Alabama (12-9, 4-4; KenPom: 46; NET: 41) men's basketball program is snake-bitten, it would be difficult to argue otherwise based on the number of players that have missed game and practice time this season. With three players already on the bench due to injury or eligibility, the team was without Herb and Beetle on Saturday. The team responded with a good effort despite the limited roster, but fell short to a good Arkansas team. Now they must recover quickly because another tough game awaits on Tuesday night when the Tennessee Volunteers (12-9, 4-4; KenPom: 65; NET: 70) come to town. Game time is 6:00 P.M. CT, and will be televised on ESPNU. Coach Oats anticipates Herb being out of the lineup for three weeks, but he did mention in his postgame press conference that Beetle is "probable" for Tuesday night.

My Two Cents: Losing Herb indefinitely could not have come at a worse time for this team as they struggle to put together a postseason resume. Herb may not be the best player on the team, but he's arguably the most important. As DJC pointed out in his recap of the Arkansas game, Herb has the best plus/minus on the team. For a team that already had its fair share of issues on defense, losing arguably the best defender in the league is not ideal.

The Vols are also struggling to put together a postseason resume in the wake of losing arguably their best player - Lamonte Turner - to season-ending shoulder surgery in December. With home dates vs Kentucky and Arkansas, plus a road trip to an improving South Carolina team following this game, you would think the Vols will be desperate for a win on Tuesday night. Alabama needs to have the same sense of urgency.

Tennessee is going to want to slow this game down. They rank 13th in the league in tempo and 14th in possession length. Factoring in Alabama's struggle to force turnovers (11th in defensive turnover pct; 13th in steal pct), if our guys struggle to get stops as they did vs Arkansas, it's going to be difficult to force the Vols into a tempo they're uncomfortable with.

Offense has been inconsistent for Tennessee this season. In league play, the Vols rank 3rd in effective field goal percentage, 3rd in 2-pt pct, 4th in 3-pt pct and 4th in free throw pct; however, they also rank 14th in turnover pct, 11th in offensive rebound pct, 14th in free throw rate and 14th in offensive steal pct. Again, our guys have to find a way to force some turnovers because these numbers suggest that when the Vols don't turn the ball over, their shooting percentages are efficient.

Defense has been a strength for this Tennessee team. They rank 2nd in the league in adjusted defensive efficiency, 1st in effective field goal pct, 1st in 2-pt pct, and 1st in block pct. But they have some relative struggles in other areas such as turnover pct (7th), free throw rate (6th), and steal pct (10th). Their biggest weakness is on the glass, currently ranked 14th in defensive rebound pct, but they will have a size advantage so it will be interesting to watch the rebounding stats for both teams.

Alabama has the reputation as a three-point shooting team, which is true in some respects; they shoot more three's per field goal attempts than any other team in the league. But it's also worth noting they only rank 7th in the league in 3-pt pct (31.2%).  Meanwhile, despite that reputation, Alabama ranks 1st in 2-pt pct (53.2%). Unfortunately, Tennessee's size could limit Alabama's effectiveness from two (Tennessee is ranked 1st in the league in 2-pt pct defense) so this is a game where our guys need to live up to their reputation by not just shooting three's, but being efficient from three as well. And despite the lack of size for Alabama, the team does rank 2nd in the league in 2-pt pct defense. When you consider that both teams score and defend well from the 2-pt part of the floor, it seems logical that points in the paint could determine the outcome. As I mentioned, I think Tennessee's size advantage gives them the advantage in the paint; however, if Alabama can make three's and force turnovers for transition opportunities, they can negate that advantage.

Players to Watch: I was going to focus on Jaden in this space because he was great on Saturday, and he's been really good for most of the season. But in the wake of Herb's injury, I'm going to focus on Kira Lewis and John Petty. Arkansas coach Eric Musselman made it clear in his postgame press conference that their gameplan was to shut Kira and John down, which they did: Kira and John combined for 7-21 from the field (1-10 from three) and 11 of the 17 turnovers. That's simply not going to cut it from the top two players on the team. Even more so on a night where the team, down two players, got good performances from Jaden, Alex and Javian.

I'll cut John some slack because, with Herb out, he was given the unenviable task of having to guard Mason Jones for much of the evening. Having to expend so much energy on one end of the floor can affect you on the other. However, Kira, while he had some moments in the game, simply didn't play well; his jump shot was flat, and he frankly wasn't aggressive with the ball. He had seven turnovers in the game, most of them seeming to come as a result of him just not being aggressive. I'm always in favor of unselfish play, but only when it helps your team. Kira has to be more assertive. It's not fair that an 18-year-old sophomore has to take so much ownership of his team, but that's what has to happen if this team wants to have any chance of finishing this season strong.

John Fulkerson and Yves Pons could be a match-up problem for our guys. At 6'9, 212 lbs, Fulkerson (11.6 pts, 6 rebs, 1.5 ast, 1.3 stls) is a physical big that plays with energy on both ends of the floor. And Pons (6'6, 215 lbs; 11.1 pts, 4.8 rebs, 2.6 blks, 1.1 asts) is a phenomenal athlete that is developing into a good basketball player as well. His measurables alone will give him a chance at making a NBA roster. I don't think Alabama has anyone on the roster, even a healthy Herb, that can match up with Pons physically.

Prediction: I don't know if many fans understand the importance of losing Herb. It's no coincidence that the team was playing its best basketball during the point of the season that Herb recovered from the elbow injury he had in the Penn game. And now to lose him for the better part of February, it could be the straw that breaks the back of this team. I trust the coaching staff, and I trust the players to do everything they can to compete. Unfortunately, I fear the attrition may have finally caught up with this team.