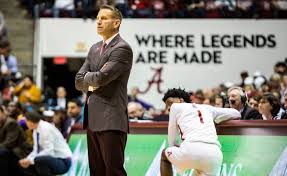 The win vs LSU this past Saturday was a big one for Alabama (14-11, 6-6; KenPom: 46; NET: 35), which included one of the best individual performances from a college basketball player that I've ever seen. Unfortunately, that game Saturday was just one of several important games for the team as the regular season enters its final three weeks. Let's be real: they're all important at this point. Next up: the Texas A&M Aggies (12-12, 6-6; KenPom: 170; NET: 132) come to town on Wednesday night. Game time is 6:00 P.M. CT, and will be televised on the SEC Network.

My Two Cents: Herb's performance on Saturday was so inspiring (for a lack of a better word) that it overshadowed great games by a number of other players such as Kira, Galin and Shack. If Alabama reaches the NCAA Tournament, Herb's one-handed free throws late in the game will join Collin Sexton's buzzer beater in the SEC Tournament and Trevor Releford's half-court buzzer beater vs Georgia as notable moments of the program in the last decade. Even if the team doesn't make the tournament, I won't ever forget the toughness, mentally and physically, that Herb showed in that game. It leads me to believe that if Herb had been healthier this season the team would be well on the right side of the bubble right now.

Unfortunately, Alabama is squarely on the bubble. The win over LSU on Saturday was the second quad one win for the team this season. As long as LSU doesn't struggle down the stretch, that win should remain in the quad one column. Now the team has to string some wins together in games that, on paper at least, are winnable. This has been an issue for Alabama teams over the last decade so the final three weeks could be very interesting.

It's no surprise, but Buzz Williams is doing a great job at Texas A&M in his first season. Watching the Aggies in November/December, it was hard to fathom how this team was going to win four games in conference. But they continued to improve and are 6-6 in league play entering this one. Their non-conference struggles give them little chance to make the postseason minus a run in Nashville, but they're a dangerous spoiler team. With the Aggies NET ranking of 132, Alabama simply cannot afford to lose this game.

The first thing that stands out when looking at both of these teams on paper is the contrast in styles. Alabama is tops in the league in tempo, while the Aggies are 14th in tempo. Buzz Williams has no intention of trying to run with Alabama so expect the Aggies to do everything they can to force Alabama to win a game in the 60s much like Tennessee did. The Aggies are not an offensive juggernaut with the exception of two areas: offensive rebounding pct (4th in the league) and free throw rate (also ranked 4th). Oddly, they do struggle to keep teams off the defensive glass (13th in defensive rebounding pct), but they are ranked 2nd in defensive free throw rate, which is impressive when you consider how strong the Aggies are on the defensive end.

And they are strong, ranking 5th in the league in defensive efficiency. Where they really thrive is forcing turnovers (1st in the league in defensive turnover pct and non-steal turnover pct). Alabama has cleaned up the turnovers in recent games, but Georgia, LSU and even Auburn are not as good defensively as the Aggies. For Alabama's tempo to be effective, they need to rebound well on the defensive end in order to get the ball out and force the tempo while limiting turnovers. If A&M can create turnovers and grab offensive rebounds, they may be able to generate high-percentage scoring opportunities (always crucial for a team that struggles on the offensive end) while controlling the tempo of the game.

Players to Watch: I'm going to give Galin Smith some love. His 10 point, 6 rebound effort on Saturday was by far his best performance of the season. Not only that, but the 37% free throw shooter knocked down 6-7 from the foul line. His free throw shooting form was noticeably altered, and for the better. According to postgame comments made by Coach Oats, Coach Hodgson has been working with Galin on his foul shots. If he can become reliable at the foul line and fight for rebounds like he did on Saturday, he's going to play more minutes going forward.

Senior Josh Nebo is the only player that averages double-figure points for this team. That's not all that surprising when you consider the tempo that A&M plays at. The Aggies do have six other players that average six points or more. Nebo's importance to this team is more than just points: he also leads them in rebounds and blocks. More importantly, he's the leader of the team and an energy guy that can absolutely wreck opposing teams in the paint. In Coleman last season, Nebo finished with 21 pts, 7 rebs and 4 blks. Everyone remembers the off-balance three that former Aggie TJ Starks hit from almost half-court to win the game, but he's never in that position if Nebo doesn't absolutely crush Bama in the second half of that game. Nebo is ranked 6th in the league in fouls drawn per forty minutes so the Bama interior players will have their work cut out for them. For the season, Nebo is only being used in 16-20% of the Aggie possessions. I gotta think Buzz wants Nebo more involved.  With Alabama's lack of size, A&M may look to get Nebo involved early.

Prediction: I want to believe that this team is different than the previous four years when February was our nightmare. I'm so beaten down as a Bama fan in recent decades that I know I'll be nervous when this game tips off because it's the type of game that the program has lost in recent years. I do think the mindset of this team is different, but again, the struggles in recent years in games of this nature gives me pause. I probably won't get my wish, but I'm hoping that we Bama fans get an easier last five minutes of this game than we normally get in February. Fingers crossed, our guys come out locked in and ready to go. Final thought: it's hard to type while your fingers are crossed.