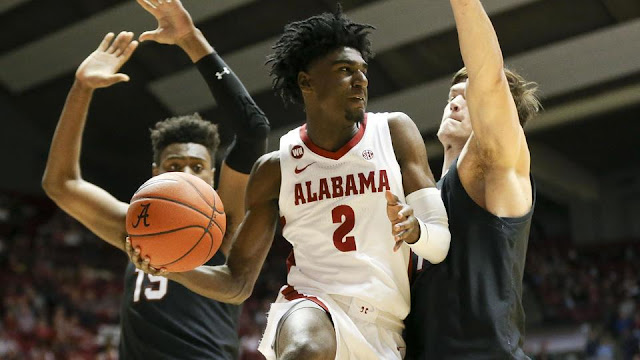 If I may cite a famous line from a not-so-popular film: "Just when I thought I was out, they pull me back in!" Alabama (16-13, 8-8; KenPom: 48; NET: 40) refused to close the book on this season by gutting out a 90-86 victory this past Saturday. With two games remaining in the regular season, can this team create some momentum for itself heading into Nashville? The first step to answering that question is defending home court on senior night when the Vanderbilt Commodores (9-20, 1-15; KenPom: 187; NET: 170) visit. Game time on Tuesday night is 7:30 P.M. CT, but get there early for the senior night festivities. Only one senior - James "Beetle" Bolden - will be honored on Tuesday night, but it could also be your final chance to see any players that may pursue professional opportunities after this season concludes. SEC Network will televise the game.

My Two Cents: As basketball fans, we've all had our share of frustrations with this program over the years. But one thing I've always felt proud of as a fan are the number of high-character players that have come through the program. That kind of character was on full display again on Saturday night. Per Bryan Passink (in case anyone doesn't know, a radio analyst for Crimson Tide Sports), Alabama starters/key reserves have missed a total of 94 games. The SEC Network showed a graphic of 73 on Saturday, but I don't recall if that was number of conference games missed. Whatever the number, Alabama leads the league by a wide margin in the number of players that have missed games this season due to injury or illness. And yet, the team still has a puncher's chance at making the NCAA Tournament because they have refused to wilt despite the adversity. That takes character, and character is easy to cheer for.

Vanderbilt finally snapped their record 28-game conference losing streak when they upset LSU, but they have lost seven straight since that win. For Alabama, every game is a must-win at this point. But Vandy remains the one team in this league that you absolutely cannot lose a game to, particularly on your home floor. Whether our guys win this game by one point or twenty, they've got to win this game.

Players to Watch: I mentioned in the Carolina preview that, with JP out, someone would have to step up to help Kira and Shack on the offensive end. That player turned out to be Javian Davis, posting a career high in points (20) and rebounds (10), which was the first double-double of his college career. Herb was also lights out, particularly in the second half, but there's no way Bama wins the game without Javian stepping up the way he did. He's a redshirt freshman that has struggled at times this season, but if he can produce even a fraction of what he did Saturday in these next two weeks, this team might just get over the hump.

It's been a tough season for the Dores, but Saben Lee has continued to compete at a high level. The junior guard is averaging 17.5 pts, 4.2 ast, 3.3 rebs, and 1.5 stls. He's particularly dangerous off the bounce, getting to the basket and drawing fouls. Herb will likely be tasked with defending him for most of the game. If Vandy is going to stick a fork in Bama's season, it'll start with Lee. Bama must limit him.

Prediction: I do feel empathy for the Vanderbilt players. For all of our frustrations with the Alabama basketball program, I've never experienced as a fan what Vanderbilt has endured the last two years. That said, I am an Alabama fan that hopes desperately that his team can find a way into the NCAA Tournament. For that to happen, Alabama has to win this game. If the NCAA Tournament hopes are torpedoed on Saturday or next week in Nashville, so be it. Just don't let it be on Tuesday night in the final home game of the season.