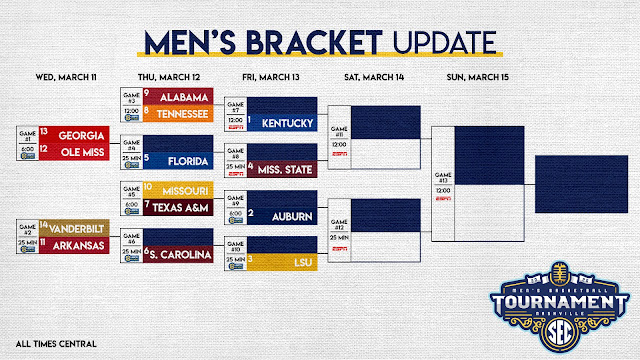 Due to time constraints this week as well as a lack of emotional investment, I'm not going to do a full preview for the Tennessee game or any additional games Alabama may play in Nashville. Instead, I'm going to just write a quick preview of the tournament itself. At the end, I'll include some picks.

But first, it's a fair question to ask: will there be a tournament this week that fans can attend? Nashville has reported its first case of the corona virus, and with that report comes the possibility that the event (as well as other conference tournaments and the NCAA Tournament itself) could limit the number of spectators at the event, if not bar fans completely. The SEC has stated that it's monitoring the situation. This coming on the heels of the tornado in the area is less than ideal. My gut feeling is that the tournament will go off without a hitch, but never underestimate the power that panic holds over large numbers of human beings.

My Two Cents: If the tournament proceeds as normal, I won't be surprised if it's less than chalky. There is currently no SEC team ranked in the top 25 at KenPom, which suggests that the league lacks an elite team. That said, Kentucky will obviously be the favorite as a result of their 15-3 conference record and their fanbase filling up the arena. But point guard Ashton Hagans did not make the trip to Gainesville due to "personal reasons". This coming after Hagans refused Calipari's instruction to enter the game in the second half of their home loss to Tennessee. On top of all that, a video went viral this weekend showing Hagans showing off a stack of money. Regardless of how Hagans came into possession of the money, it's not a good look just months after the sport went through a public flogging in the wake of the FBI investigations. Calipari has said he expects Hagans back for the postseason (that was before the image went viral for what it's worth), and the UK compliance office have said they've investigated the matter. However, should Hagans not play in Nashville this week, that could dramatically alter the odds.


Our chief concern of course is Alabama. And we should be concerned. After a 4-2 start in league play, our guys sputtered to a 4-8 finish. Their performance in the final week of the regular season was less than inspiring: losing at home to Vanderbilt; and, as DJC described it, throwing in the towel in the final 8-10 minutes at Missouri in a 19-point beatdown. It's hard to believe this Bama team has anything left in the tank based on the last week. If they want their season to continue past this week, they will have to win the tournament or, at the very least, win a game or two to feel confident in securing an NIT bid. There will be more to write about this Alabama team once the season concludes.

The league has four teams locked into the NCAA Tournament (Kentucky, Auburn, LSU and Florida) and a couple of teams on the bubble (Mississippi State and, despite their 7-11 conference record, Arkansas have the best metrics). Tennessee and South Carolina can still play their way into the conversation, but will likely need to advance to Sunday to have a shot. And Texas A&M is a darkhorse this week. I think there are three Coach of the Year Candidates: John Calapari, Bruce Pearl and Buzz Williams. The fact that Buzz was able to guide an A&M roster that looked incapable of four conference wins at the end of December to a 10-8 record is further proof of how good that guy is. Assuming he's able to upgrade the talent level there, expect A&M to be a player at the top of the standings as long as Buzz is in town.

Of the teams at the bottom, obviously Arkansas as the 11th seed could win multiple games. I believe they're second in the bubble pecking order in the league right now. If they can make it to at least Saturday, I think they've got a good chance of making the field because the selection committee will evaluate them at full strength with Isaiah Joe. Georgia is also one to keep an eye on. The Bulldogs are the worst defensive team in the league, but they do have the talent to win a couple of games. And, it sounds crazy, but watch out for Vandy. The Commodores played their best games of the season this past week. If a 3-15 team ever had momentum heading into a conference tournament, it's this one.

Ole Miss over Georgia  (UGA is the more talented team, but their lack of defense is a major concern.)
Arkansas over Vanderbilt   (Vandy popped bubbles for two teams last week. Are the Hogs next?)

Alabama over Tennessee  (Herb missed the first game with the Vols. I hope JP is healthier.)
Florida over Ole Miss  (Florida has arguably the best roster in the league, but which team shows up?)
Texas A&M over Missouri  (If there's a bid thief in this tournament, it's the Aggies.)
South Carolina over Arkansas  (The Cocks didn't end the season well, but they're a capable team.)

Kentucky over Alabama  (This is not the same Bama team that Cal praised in January.)
Florida over Mississippi State  (State is likely out of the NCAA Tournament with a loss on Friday.)
Auburn over Texas A&M  (A&M was the only team to win at Auburn this season.)
South Carolina over LSU  (The Tigers have been shaky down the stretch.)

Florida over Kentucky  (The Gators let two slip away this season vs UK. Third time's the charm?)
Auburn over South Carolina  (I hate it as much as you do.)

Florida over Auburn  (The Gators are likely in the NCAA Tournament no matter the results this week, but Mike White needs a good week to improve relations with Gator fans.)
Posted by MSmilie at 9:00 AM