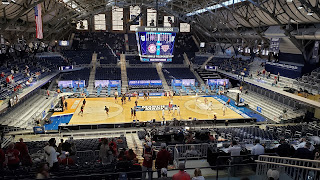 As expected, Iona was well prepared and had a good game plan for us.  Their big did a good job of protecting the rim when our guards beat their slower men off the dribble.  Instead of collapsing, they stayed with our shooters, forcing us to take fewer threes than normal.  In a nod to historical Hinkle arena, they even successfully ran the picket fence on us in the first half.  Our wings were not finishing at the rim, and they kept the pace slower than our liking.  The game was a back and forth slog, until a couple of 3s by Alex and a steal and dunk from Herb broke it open midway through the second half. 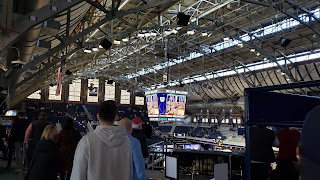 I was disappointed with the way we finished the first half.  We had a 6 point lead late, and I was thinking we might be able to push it to double digits.  Instead we had a couple of costly turnovers that allowed them to get within a point.  We made an adjustment at halftime and started using our size advantage on the wings to post them up, but I thought this took us out of our tempo.  We had some success in the halfcourt when we spread the floor and let JQ take it on the dribble drive, as he was the only one able to finish at the rim. 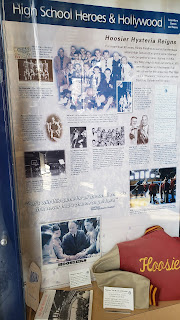 Defensively we were fantastic.  We controlled the boards and altered shots at the rim.  This is what allows us to be competitive when we are off of our game.   Regardless, at some point we are going to have to make a lot more than 5 threes, and shoot more than 16 of them, if we are going to make a deep run.  We also left a lot of points at the line, uncharacteristically shooting only 13 of 23.    We desperately need Petty to get out of his offensive funk, but give him credit for continuing to play great defense.  It's the reason we've got another game Monday night. 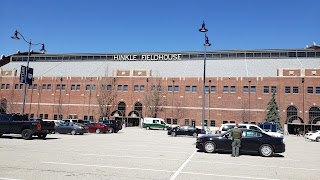 Herb had 20 points and 6 rebounds.  JP and Shack both scored 10 each with JP pulling down 7 boards.  Q was also in double figures with 11.  Juwan Gary gave us 6 points and 4 rebounds in 20 minutes, and I thought he was a big factor with Jordan still appearing to be limited. 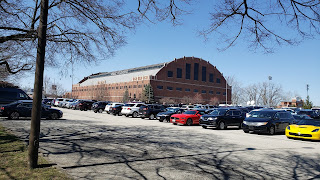 Survive and Advance, that's what it's all about this time of the year and we accomplished that.  I was very fortunate to be one of the 1,300 or so fans allowed in to see this game.  Going to a game at Hinkle scratched an item off of my bucket list, and it did not disappoint.  This place is the Wrigley Field of college basketball.  It's a national historic landmark, and while it's seen many renovations over the years it still has that old school feel and charm to it.  Coleman Coliseum was actually based on the design of Hinkle, and you can see that somewhat with the barrel shaped roof that runs opposite of the court direction.  Hinkle now only holds around 9,000, down from it's original 15,000 capacity.  As you can see from my pics, even in the 300 level you weren't too high, though we were a little farther off of the court than we would have been in a more modern arena.  I really liked how the windows provide a lot of natural light, and they block the ones that would be in the eyes of the shooter.  The brick work and detailed architecture is amazing.  I suspect the concourses and restrooms/concessions might be a nightmare if it was at full capacity though.

Unlike previous tournaments, tickets are only good for one game instead of two game sessions, and they spend a little over an hour cleaning the arenas between games.  As soon as our game was over they asked everyone to leave and started spraying everything down with disinfectant.  I do think we benefited from having 95% of the crowd cheering for Alabama, as in normal times all of the fans of the teams not involved would have been rooting for the underdogs.

I will have more about the Indianapolis bubble experience when I recap the Maryland game.  I left Birmingham at 6 am Saturday morning and drove straight to Hinkle, so I really haven't explored the city much yet, but so far it's been a positive experience.

Up next, we go to Banker's Fieldhouse, home of the Indiana Pacers to play the Maryland Terrapins in the second round Monday night.  Tipoff is set for 8:45 pm EDT and will be televised on TNT.