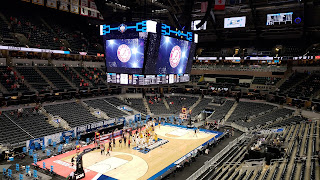 On to the Sweet 16!  We got off to a bit of a slow start, but they ended up playing at our pace and just couldn't keep up.  We took control of the game about midway through the first half and never looked back.
We switched up the starting lineup, going with Shack, Petty, Juwan, Herb, and Keon.  Jordan only played a couple of minutes and I'm wondering if his injury has regressed.  Q was huge off the bench with 14 points and 11 assists.  His dribble drive game has been on point so far this tourney.  JP's shot was back as he added 20, and Shack was our leading scorer with 21.  When the shots are falling this offense can light it up.  Maryland was content to enter a 3 point shooting contest with us, and they did fairly well, going 10 of 27, but it wasn't enough with us shooting nearly 50% at 16 of 33. 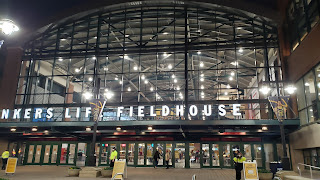 We also dominated on the boards with 25 rebounds to 15.  Maryland only got 4 offensive rebounds, as they generally sent everyone back on defense as soon as they got a shot up.  I was surprised Turg stuck with this strategy, as it clearly wasn't working to slow the pace down like he hoped. 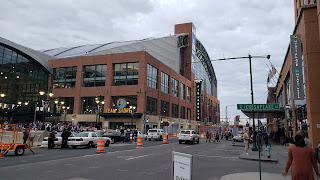 It was great to get Primo back and he gave us 10 points in 20 minutes.  Alex made some huge 3s that really opened things up for the guards.  He ended up with 13 points.  Juwan handled the dirty work, leading the team with 7 rebounds.  Herb got in foul trouble and ended up with only 6 points and 3 turnovers in 17 minutes.   It's a testament to the depth of this team that we can still win a second round NCAA tournament game by nearly 20 points with our MVP having an off night. 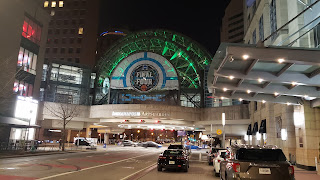 Banker's Life Fieldhouse, home of the Indiana Pacers, is a really nice facility.  It felt like way less than 25% capacity though, there was nobody sitting in the upper level along the sideline behind us.  We probably had about 60% or so of the fans allowed in.  I felt like the atmosphere was much quieter than the first round game, maybe the larger and nicer arena just made people more comfortable and less intense.  We did get some cheers going later in the game and players as well as Coach Oats acknowledged the crowd at the end. 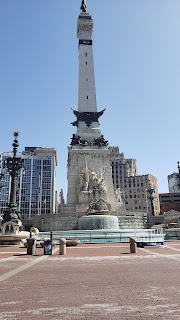 I've probably drove through Indy a couple of dozen times over the years going back and forth to Chicago, but this is the first I've really spent any time here.  It's actually a pretty cool city.  There's a bar/sportsbook a couple of blocks from my hotel, where I've made enough betting on the games to cover all of my expenses thus far.  Everything is within an easy walking distance, and there's plenty of sports bars and decent restaurants around.  The people have been friendly and they really know and love their basketball.  It's been a fun atmosphere with fans of so many different teams, and we are as well represented as anyone.  Michigan, Iowa, and Illinois before they got beat were probably the most fans I've seen.  Abilene Christian surprisingly brought a pretty good crowd.  I haven't seen the first LSU fan, and only a handful of Florida and Arkansas folks.
Up next, we're back at Hinkle for a sweet 16 matchup against the UCLA Bruins.  Tip off is set for 7:15 EDT Sunday.
Posted by DJC at 9:50 AM