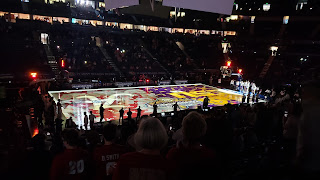 To quote the great Coach John Doe, "I KNOW you missed me!"  I attended my first game of the season today to watch our team win its first SEC tournament championship in 30 years.  On a personal note, in the grand scheme of things I've been very fortunate throughout this pandemic.  I haven't caught the corona virus, haven't lost employment or significant income, and haven't lost any loved ones to illness.  However, not being able to attend Alabama basketball games has probably been the most difficult part.  The is the first season since I was in high school that I did not attend a regular season game.  I grew up in the days of the SEC tournament being known as the "Wimp Sanderson Invitational," and there was no way I was missing this.

It was a physical, scrappy game between two teams that obviously didn't have their legs 100% under them.  I'm glad we don't play again until Saturday.

We've struggled at times this year with slow starts, but wasted no time today in jumping out to an early 8-0 lead.  I was thinking and hoping it may go like the two previous games against those cheaters this year, but unfortunately they were having none of that.  We had 4 turnovers in a short span and the lead quickly evaporated.  The game seemed to turn when Keon went out with an injury and LSU took a lead.  We managed to scrap and keep it close and finished the half on a strong note to take a 40-37 lead into the half.

It was a back and forth game with neither team taking full control.  LSU would go ahead by 2 possessions and we would quickly answer.  We would gain momentum and go up by 6 or so but they would answer.  We couldn't put them away.  I thought both teams looked fatigued at times but played hard and physical.

With Primo out, Keon really stepped up playing 25 minutes despite coming out in the first half with an injury.  He had 14 points and played adequate defense even if not quite on Primo's level against some tough matchups.

Speaking of touch matchups, I hate the guy as much as anybody, but you have to give Watford credit for his performance today.  He almost single-handedly won the game for them, and we had no answer for him in the second half.  I thought Alex actually did the best job on him in the first half when they were matched up, but nobody was stopping him down the stretch, until we finally did on the last possession.

Shack was the leading scorer with 21 points.  A key point in the game came about midway through the second half when he missed a midrange jumper, the cardinal sin in Coach Oats' system.  We took more midrange shots today than Coach would have liked, and he appeared livid on the sideline after each one.  I think that was a symptom of playing 3 games in the 3 days.  Anyway, after getting chewed out in a timeout for missing a midrange-J, Shack responded by knocking down a couple of 3s that seemed to remove the lid from the rim.  His scoring was the offensive spark we needed when we were struggling with our perimeter shots in the second half.

Juwan Gary played tough, pulling down 8 rebounds and scoring 8 points in 17 minutes.  His game has really improved over the course of the year, and he's becoming that rebounding/second chance points guy we need in the paint.

Q scored 14 and despite making the all tournament team, I don't think people appreciate how good he's playing right now.  I like him more off the ball, but he has good court vision and is showing some quickness, good moves, and an ability to finish at the rim.  He was a McDonald's All American for a reason and that talent is starting to show now that he's recovered from the illness that set him back earlier this season.  He is a key component to a deep run this month.

Herb had 13 points (including the game winner), 11 rebounds, and 6 assists to only 2 turnovers.  He's really taken to the point forward position and is a great leader on this team.  I loved his quote about making this a "basketball school," which is referenced in the title of this post.

My biggest takeaway from today, and from the season as a whole, is that this team, under great senior leadership from Herb, JP, and Alex, has developed a winning attitude.  When we are on, we are capable of blowing out decent teams because we play fast, shoot well, and have great depth.  More importantly, when the shots aren't falling, we clamp down on defense, and keep scrapping for rebounds and loose balls and do the little things it takes to win close games down the stretch.  We are regularly finding a way to grind out wins that would have been losses more often than not over the last decade or so.  We could very well lose in the first round in a close game next weekend, that's the nature of the tournament, but even if that happens it won't change the fact that the culture here has changed.

JP has been in a bit of a slump, and I  wish we would run some sets to get him some more shots.  I feel like we need him to shoot his way out of this slump to be a serious contender.  Jordan still doesn't seem to be 100%, we will need him to continue to improve.  If he gets back to his pre-injury production we could hang with anyone in the tournament.

As with most things this season, it was a weird atmosphere for an SEC tournament game.  It was nice being able to park right next to the arena and grab a bite an hour before the game across the street with no wait.  It was odd not being surrounded by a sea of Kentucky blue.  They only sold about 3,000 or so tickets, and I would guess maybe only 2,000ish were used.  We had upper level seats but moved to the lower level with no problems.  Some of the unsold seats were blocked off, but oddly it was random, there were entire rows that weren't blocked off.  There was a small section of LSU fans behind their bench, but otherwise we had close to 85% of the fans.  It was relatively loud given the limited attendance, and we had several students there who led cheers that the whole arena followed along with.  I will admit I was straight up acting a fool, between (unsuccessfully) taunting Trendon Watford, missing all the previous games this season, and it being our first tournament championship in 30 years...I don't have much of a voice left.

Up next, we go to Indy to play the Iona Gaels in the first round of the NCAA tournament next Saturday at 3pm Central on TBS.  I fear this will be a difficult game.  Whatever you think about Pitino, he can flat out coach and I openly advocated for us hiring him two years ago.  Here's hoping that Coach Oats and crew can prove me wrong once again.  I'm planning to make the long drive and will post an update when I can. 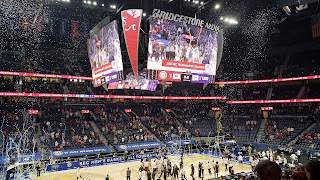 Enjoy this, fellow Bama Basketball fans.  We are the UNDSIPUTED SEC CHAMPIONS, and there's more to come.  ROLL TIDE!